This food blog is supposed to be “Let’s Eat Out Once a Week,” not “Eat Out Daily,” but I have to admit I’ve been dining out fairly regularly recently. Perhaps it’s the good weather that makes me want to go out! Or, could be too that there are just so many different places to try out! Maybe I should have at least called this blog “Eat Out Twice a Week” instead!

On Tuesday afternoon, my friend K and I decided to have lunch at Stonegrill @ the MET, which is conveniently located below the food court at Metrotown in Burnaby.

Instead of having the same old burgers, I wanted to try something different, so I settled on the Lobster Chipotle Cheddar Panini. I’d never had it before.

It came with lobster chunks, tomato, lettuce, and cheddar. Instead of salad, I decided to go with Waffle Fries. Being the copycat that my friend K was, he went with the exact same thing.

Stonegrill was actually very busy on Tuesday afternoon, and so it took awhile before the food came. During the lengthy wait, K – who’s a big soccer fan – was at least able to catch most of the second half of the Real Madrid-Sevilla FC match on their TV monitor. Since I’m not a soccer fan, I focused on the monitor on the other side of the bar/counter and was intrigued to see a message come up on the ticker of that particular news station stating that Canadians are spending more money on taxes than on personal necessities! 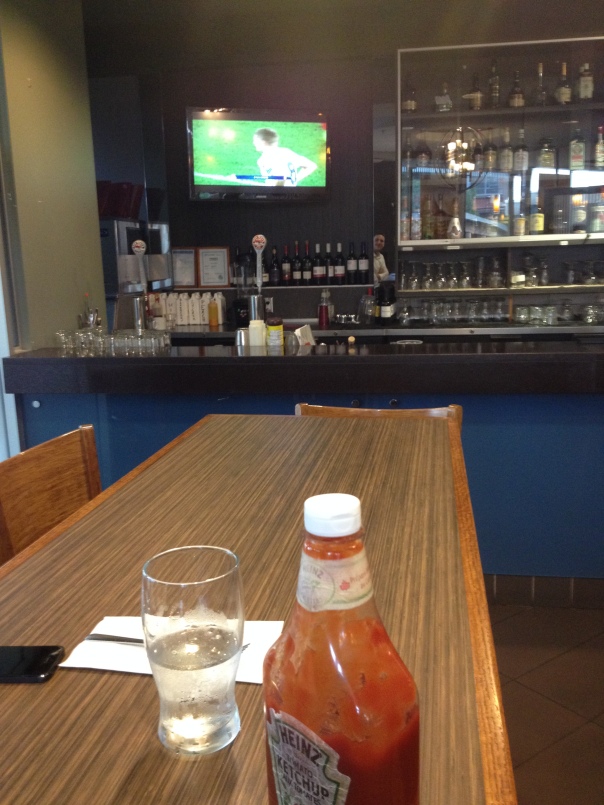 Eventually, our food came, and I thought the taste of the panini was all right. The lobster meat was tender, and tasted good. Since I don’t usually eat panini – hence my wanting to try it because my goal was to try something different – I guess I can say I’m not a fan of it. Obviously it’s not my first choice normally, but still the taste was all right.

I thought that the amount of waffle fries, meanwhile, was way too generous – but I should say that I’m not a big eater to begin with. I couldn’t finish them, so needless to say I was full before I was done. They were crunchy, so they were pretty good. Just too much for me.

Though the server didn’t bring our bill promptly and also the food was slow to arrive, she at least brought refills for us and checked in with us once. It was busy during lunch time, so I didn’t think it was too, too bad. (My friend K disagreed with me.)

This was the third time that I’d been to Stonegrill @ the MET, and so far I don’t have any complaints. It’s conveniently located in Metrotown Mall where you can stop in and grab a bite after/before doing some shopping.

No complaints whatsoever. I’ll have to disagree with what my friend K thinks. Anyway, his opinions aren’t that important – not for the purposes of this blog. 😛

Item: Lobster Chipotle Cheddar Panini
Purchased at: 4820 Kingsway #259, Burnaby, BC (inside Metrotown Mall)
Price: C$13.00, plus tax
Final Thoughts: Slow service, but if you are not in a rush, you get to enjoy a ballgame on their monitor during your meal. Overall, I was satisfied with this particular visit.

Posted on August 15, 2014, in Food Review. Bookmark the permalink. Leave a comment.