Met up with Adrian Brijbassi on Saturday night to give him a copy of my new book, “Tom Candiotti: A Life of Knuckleballs,” as a way to thank him as he was one of the people that I had interviewed as part of my research.

We met at the Rosie’s on Robson in downtown Vancouver (which is on the cusp of Yaletown), and sat at the bar to watch the extra innings of Game Two of the San Francisco-Washington NL Division Series – and to catch up as well, of course. The last time we had met up was back in February on the day the Senators played the Canucks in the “indoor”-outdoor game at BC Place (played with the roof closed because of the rain that afternoon).

I ordered their Calamari, which came with onions, peppers, and tzatziki for dipping. It was delicious. I liked it. Very crispy and the sauce was great too. 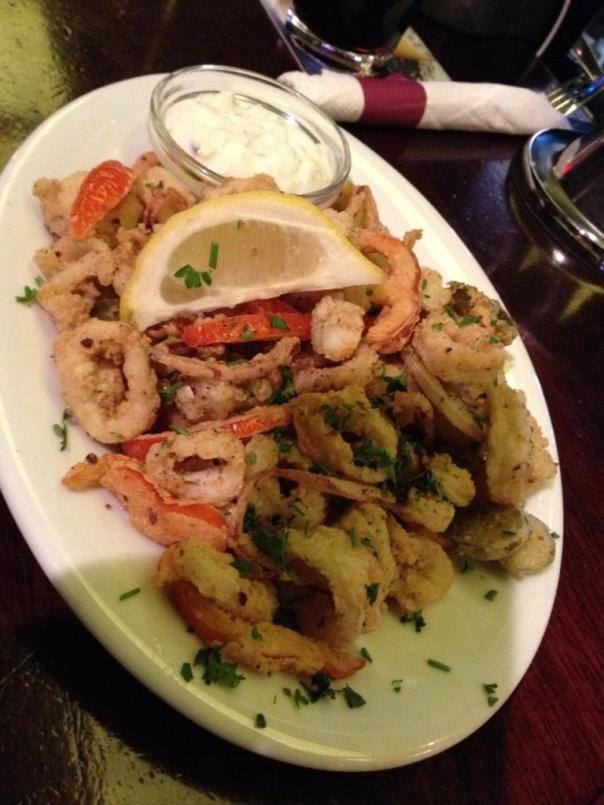 There didn’t seem to be a lot of people on this night – we were there from around 7:00 to 9:00-ish as we didn’t leave until the end of the ballgame. The service was quick and friendly. When the bartender switched the game to the Canucks-Oilers preseason game, we asked him if he could change it back to the baseball game and he obliged.

Adrian is someone that I respect immensely, and it was great catching up with him. His wife Julie stopped by the pub to say a quick hello – and Adrian showed her my book. She congratulated me and I stayed humble, but she reminded me that what I had done was a huge accomplishment and I deserve to be proud of it and brag about it. After she left, the game kept going on and actually made the postseason record books for both the longest game in terms of innings (tied for the record) as well as time duration (broke the record). In the 18th, I remarked to Adrian that the game would probably be decided on a misplay or an error. On the next pitch, Brandon Belt hit a go-ahead homer to put the Giants ahead, and then they hung on after a rookie named Hunter Strickland (whom neither Adrian nor me had heard of) pitched a shaky bottom half of the inning to close things out.

Overall, an enjoyable visit to Rosie’s on Robson. Definitely will be packed during hockey season for sure.