McDonald’s “Build Your Own Burger” (#CreateYourTaste)

Note: This post was first published on Let’s Eat Out Once A Week but also appears on other blogs in my network as I have a couple of other food blogs plus a personal blog. 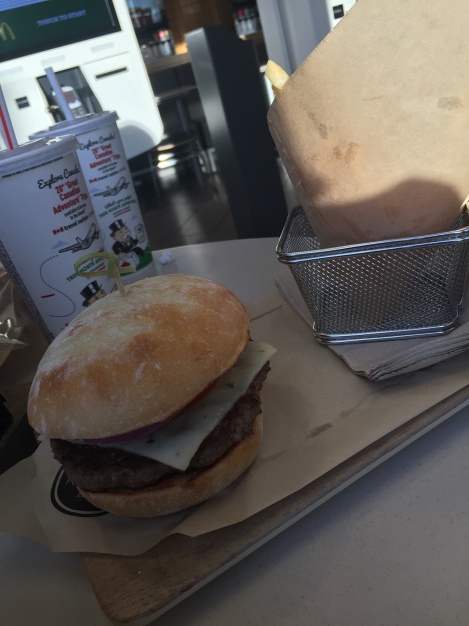 I was invited to the McDonald’s Restaurant location at 20037 84th Avenue in Langley this week for a walk-through of the next chapter of McDonald’s Canada, as they were promoting their “Create Your Taste,” “McCafe Bakery,” and table delivery service as part of their innovative, personalized guest experience. It was all part of McDonald’s Canada’s brand transformation as they look to target new and past customers back to McDonald’s.

Now, this Langley location I was at, was a newer location as they had just opened in November of 2014, and they were among the first in Metro Vancouver to have the “Create Your Taste” (Build Your Own Burger) feature for their burgers – something you can only get through their order kiosk. (From what I understand, one Toronto location launched it two weeks earlier, and one in Edmonton followed suit a week later. Two other locations in Vancouver – I think, if I heard correctly – launched the “Create Your Taste” at the same time as this Langley restaurant.)

I’d seen the order kiosks before at the location behind the downtown Vancouver Public Library and also the one on Grandview Highway – but had never used them.

Here at this Langley location I was invited to play around on it and order through one of the four kiosks they had in the store. And like I said, this was among the first location in Metro Vancouver with “Create Your Taste” – where you get to build your own custom burger! Pretty neat!

I didn’t take a picture or video of the ordering process, but as you’re building your burger, a list (or summary points, if you will) of your toppings/ingredients, etc. appears on the left side of the screen reminding you what you’ve selected so far for your custom burger.

This is best summarized in five steps – 1. Choose your bun; 2. Select the cheese; 3. Select the sauce; 4. Choose the toppings; 5. Add bacon if you wish. 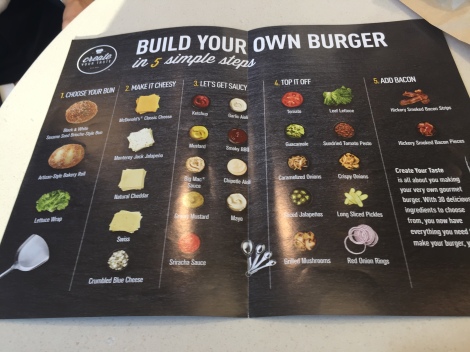 Among the choices for the bun were the Black & White Sesame Seed Brioche-Style Bun, the Artisan-Style Bakery Roll, or the Lettuce Wrap. I went with the first option. For cheeses, there were five options and I went with Crumbled Blue Cheese. For the sauces, I remember you could get as many as you wish – and again, whatever you’ve chosen appears on the left of the screen to remind you – and they even had Sriracha Sauce, Garlic Aioli, Chipotle Aioli, among others. I was told you can choose those only when you order through the kiosk, so that’s not bad!

For the toppings, I believe I had the caramelized onions, red onion rings, and grilled mushrooms, but of course you can go with other traditional tings like tomato, lettuce, and others.

So, after all that, you pay with your debit/credit card and pick up a wooden number plate, and choose a table and wait! They will bring your food out to you when it’s ready. And that’s it!

As far as I know, what happens in the kitchen next is they will prepare your items fresh once the order has gone through, ie. they prepare your bun and cook your beef patties fresh, etc. and put everything together. I even got a chance to take a look behind the scenes as well: 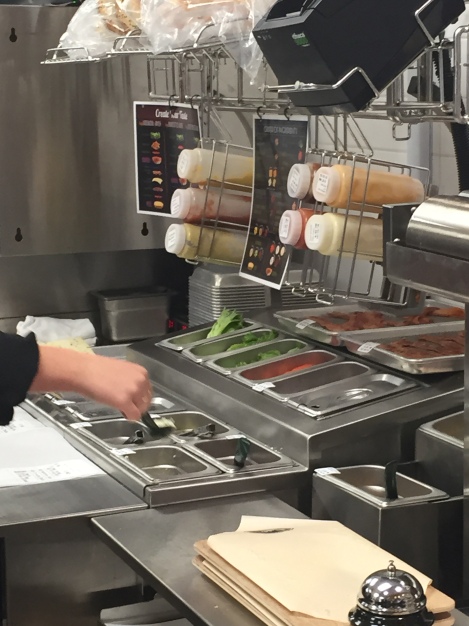 On this visit, the guys that served me – I believe their names were Brittaney and Megan – were wonderful as they brought the food over and also came back to check on me to see if there was anything else I needed. It was definitely a different kind of McDonald’s experience as they’re adding this table service to a new niche. (Of course, if customers prefer to order through drive-thru or just the regular counter service or to-go, that’s fine too. They can still do that.) Oh yeah, the burger was served on this wooden cutting board and a plastic fork and knife were included. I was talking to two executives who showed me around, and they were talking about potentially each location hiring between 10-15 new staff to work this innovative table service feature (once the other locations are ready for this). Wow! Talk about job creation across the country! They were also eager to give their staff advanced training on various skills needed for the job.

McDonald’s also has this McCafe Bakery with new pastry items (I didn’t take notes as to what they have but I would guess it will be on their website). 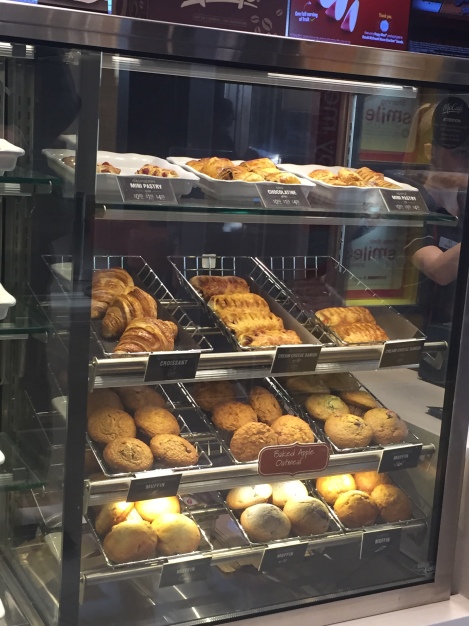 Overall, a pleasant visit and definitely 10-out-of-10 service on this night! (If you’ve read other posts on this blog, you’ll know that I don’t give those types of scores easily. I’m not particularly picky but I also pay close attention to service – even if I don’t complain to restaurant staff when there are problems. On this visit, there were no issues whatsoever.) Also, to have a chance to listen to the franchise’s vision and future plans from two of their executives was insightful as well. I felt welcomed as a guest indeed, like they appreciated having me come in and try out their burger.

Oh yeah! Almost forgot… the burger was delicious! Also almost forgot… for the meal you could have fries, poutine, or salad. I got a salad. But if you noticed from the picture above, if you got fries, they served them in this little metal tray. Kind of like other food places that do this too. Another thing is because of the sauces I picked, it could be a messy meal – so I definitely appreciated how I was given enough napkins and also the fork and knife.

As for other notable things about this particular Langley location, there was a flatscreen visible to me where I was sitting – and this was the day the (annoying) Blue Jays won their playoff series against Texas (boo!) and the post-game was shown on the flatscreen. Also, there were outlets for plugs by my seat so I could have used them to plug in my laptop or phone if I wanted to (I didn’t on this visit). A great, neat location indeed! I certainly applaud – and congratulate – them for being among the first in Metro Vancouver with the “Create Your Taste” and for running it so smoothly! 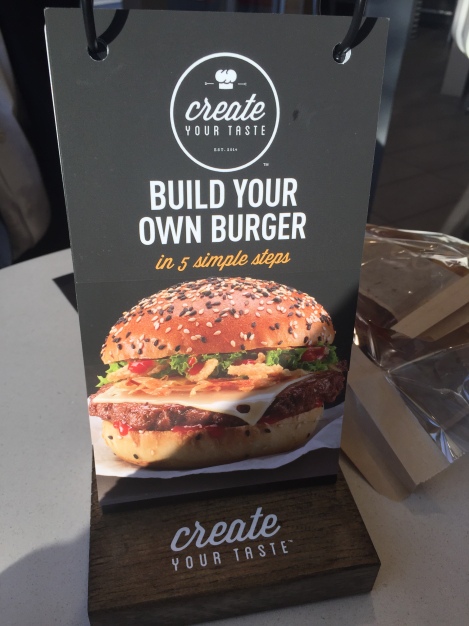 When you are looking at product or restaurant reviews, which ones do you read and why?

For restaurants, I tend to read all of them but I start with the 1-star reviews to see if there is a pattern in terms of what people complain about for a particular establishment. If multiple reviewers have similar complaints about that same restaurant, then I will tend to ignore the higher-star reviews. Too many poor reviews would be a red flag for me and I would not want to visit that establishment if I have never been there.

Unfortunately, for some reason I don’t follow the same principle when it comes to product reviews. Several years ago, I saw numerous poor reviews on Amazon for a camera of a specific brand. I chose to ignore those reviews and bought it. Sure enough, that camera had the exact same defects that others had mentioned about.

I think the difference, though, is that with restaurants, you probably want to give them the benefit of the doubt since you don’t know, let’s say it was poor service, if that came on a night when they were short-staffed. Perhaps on other days, the service is way better. You just ever know. For consumer products, on the other hand, it’s probably more clear-cut. Somehow I have been doing it backwards when it comes to restaurants vs. consumer goods, hence my little situation with the camera.

Customer Service: Why is it important for a business to have quality customer service?

Nowadays, we all have a tendency to want to post bad customer service replies online for everyone to see, whether it’s taking screen shots and publishing it on blogs and whatnot, or tweeting about the poor service we received. There are even websites that rate companies in terms of the services they provide, giving them scores and letter grades (like A, B, C, etc.)!

Furthermore, with people having more and more choices with the advent of online stores and also doing a lot of comparison shopping, if prices are more or less the same, shoppers would be more willing to give their money to stores and business that treat customers well.

Given the number of choices we have as consumers, every little detail matters. Even things like taking too long to respond to inquiries reflect poor service. Here is one example I will provide below, where I finally received a reply from this particular company’s customer service department more than a week after I emailed them:

We apologize for the long wait for a response to your inquiry. Due to a perfect storm of higher than expected support case volume combined with spring break in our local schools and a debilitating illness circulating through our office we are quite behind in response times.

As it has been more than 5 days since you submitted your request, you may have already found a solution and moved on; however, if you are still in need of assistance, please reply to this email and we will respond within 3 business days.

I found the response to be unbelievable on many levels, but yet thought it was amusing too.

If businesses do not provide quality customer service, they will find that customers will be willing to go elsewhere.,,, unless their prices are significant lower than their competitors’. If one does have to wait more than 8 business days to get a proper response, then yes, companies will find that the potential customers may indeed “move on.” 🙂