← John Cangelosi story on Herd Chronicles
Another night at the ballpark →

There’s this retired journalist from a Buffalo newspaper by the name of Budd, who spends time reviewing sports books on his personal blog.

He proudly gave my book on John Cangelosi #twostars on Twitter, and his Tweet provides a link to his blog, where he criticized the book.

Okay, let me get this straight. A professional athlete who’s been retired for more than 10 years shouldn’t be sharing his stories…. got it. That got me thinking: Did he ever rate the autobiographies on Grant Fuhr and Doug Gilmour, a pair of Sabres hockey stars? But more on that later.

(Regarding the all-time team comment, I’ll have to say that I recall reading parts of Felipe Alou’s book, in which he lists his all-time team in the middle of a chapter. I believe Mickey Lolich did the same in his book. So… what’s Budd’s point?)

First of all, shame on this fella Budd for suggesting that a guy who hit .250 doesn’t deserve a book. Excuse me, Budd, how many years did you play in the big leagues and what’s YOUR average? Your bio says you’ve written 11 books. How many of them were best sellers? So, should more than half of your books not have been written in the first place?

A search on Amazon revealed the following:

Okay, moving on to the aforementioned ex-Sabres. So, if a book shouldn’t be written about a former athlete who’s been retired more than 10 years, I assumed he didn’t have good things to say about the books of Gilmour and Fuhr… and I was right. 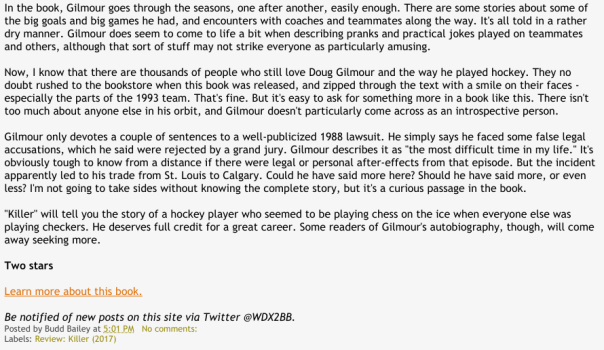 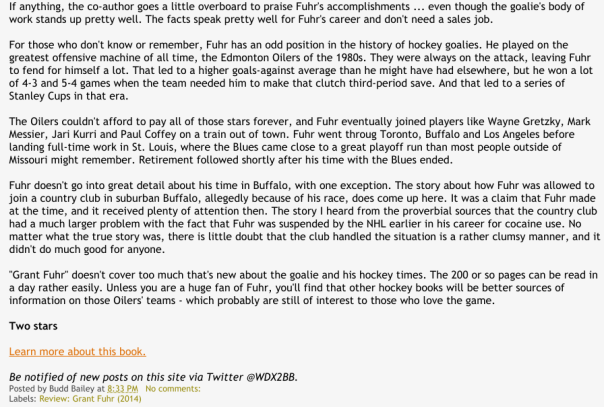 I mean, I can’t speak for the intentions of Gilmour and Fuhr along with their co-authors, but my intentions with John Cangelosi are pure: Inspire young kids through John’s stories. Anyone who’s been told “You can’t do this” should read this book and be inspired.

I hate to think that this Budd has any kids. Think about the message he’s sending. Well, you know, Babe Ruth was last relevant in the 1930s, so kid shouldn’t read about him, right? Or, some pro athlete who made it despite challenges hits “only” .250 and that’s not good enough. Okay. Good to know.

Like, for a “writer” to rip a fellow writer? That’s harsh.

Of course, when you read the following, you’ll know the kind of person we’re dealing with here.

“no one cares”? Tell that to former Flames players, who all have very positive things to say about Harley Hotchkiss and the “family” culture he brought to the organization.

Posted on August 5, 2019, in Books, Life, Sports. Bookmark the permalink. Leave a comment.

← John Cangelosi story on Herd Chronicles
Another night at the ballpark →