← Thursday’s Video Journal
Kind and caring – but sometimes not respected →

The 1988 Dodgers: Reliving the Championship Season

The book The 1988 Dodgers: Reliving the Championship Season will be released in a couple of days, and some have already received their review copies. 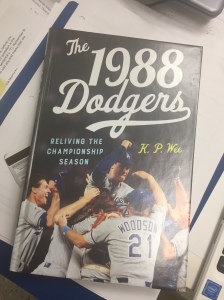 It’s time to discuss how this book was born. The general manager of that 1988 club, Fred Claire, and I had some talk about book ideas in December 2016. An idea that came up was a book to celebrate the 30th anniversary of the 1988 champions.

I initially dismissed the idea, because I’d seen at least two other books about that 1988 Dodgers team come out in recent years. Mr. Claire, however, talked about the “unsung heroes” of that championship team. What has happened to those guys, players who weren’t household names but nonetheless played significant contributions to the Dodgers that year?

I figured that it was a great point. A guy by the name of Holton came up huge in relief in Game One of the World Series. He also was clutch in the NLCS. Well, he was no Andrew Miller or Rob Dibble, but you don’t hear anything about him these days.

What about their catching situation? Sure, any baseball fan who follows the sport today knows what the Dodgers’ top two catchers from 1988 have been up to over the past 30 years. One has been a big-league manager for the same team for the last two decades. The other is currently, as of 2018, a broadcaster.

But there was a third-string catcher who warmed up Orel Hershiser during September 1988, the month in which “The Bulldog” logged a record 59 consecutive scoreless innings. The catcher was a fellow named Reyes… but what’s happened to him?

The 1988 Dodgers’ No. 2 starter… a guy who finished with more strikeouts than the aforementioned Hershiser… Leary… He actually came out of the bullpen and pitched three shutout innings to give the Dodgers a chance in Game One of the World Series. What’s he been up to?

The closer of that team was clutch in closing out Game Four, the contest that put Los Angeles up 3-1 over Oakland. He recorded seven outs to close that ballgame out, and no, he wasn’t Mariano Rivera – but for that one October night, he might as well have been. Yet, nobody talks anymore about the job Howell, the closer, did that night.

So, as much as people want to remember the 1988 Dodgers as Kirk Gibson and Orel Hershiser, the reality is that many others contributed to their winning ways. It was a team effort, and 30 years later, it’s interesting to find out what their thoughts are today about that year.

You’ll find out about those players’ thoughts, and more, in The 1988 Dodgers: Reliving the Championship Season, which will soon be available in stores near you.

For anyone interested in purchasing the book, here is a promo code to a discount!

Posted on August 8, 2018, in Books, Life, Sports. Bookmark the permalink. Leave a comment.

← Thursday’s Video Journal
Kind and caring – but sometimes not respected →